The Production of Hindu-Muslim Violence in Contemporary India 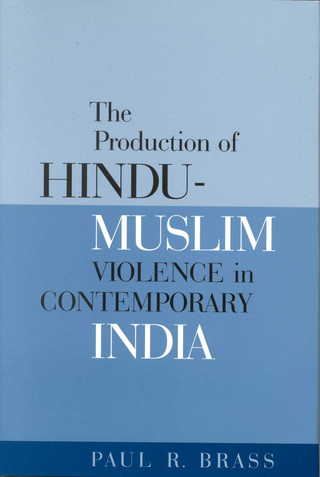 Available from University of Washington Press.

Events labelled “Hindu-Muslim riots” have been recurring features in India for three-quarters of a century or more. In northern and western India, especially, there are numerous cities and town in which riots have become endemic. In such places, riots have, in effect, become a grisly form of dramatic production in which there are three phases: preparation/rehearsal, activation/enactment, and explanation/interpretation. In these sites of endemic riot production, preparation and rehearsal are continuous activities. Activation or enactment of a large-scale riot takes place under particular circumstances, most notably in a context of intense political mobilization or electoral competition in which riots are precipitated as a device to consolidate the support of ethnic, religious, or other culturally marked groups by emphasizing the need for solidarity in face of the rival communal group. The third phase follows after the violence in a broader struggle to control the explanation or interpretation of the causes of the violence. In this phase, many other elements in society become involved, including journalists, politicians, social scientists, and public opinion generally.
At first, multiple narratives vie for primacy in controlling the explanation of violence. On the one hand, the predominant social forces attempt to insert an explanatory narrative into the prevailing discourse of order, while others seek to establish a new consensual hegemony that upsets existing power relations, that is, those which accept the violence as spontaneous, religious, mass-based, unpredictable, and impossible to prevent or control fully. This third phase is also marked by a process of blame displacement in which social scientists themselves become implicated, a process that fails to isolate effectively those most responsible for the production of violence, and instead diffuses blame widely, blurring responsibility, and thereby contributing to the perpetuation of violent productions in future, as well as the order that sustains them.
In India, all this takes place within a discourse of Hindu-Muslim hostility that denies the deliberate and purposive character of the violence by attributing it to the spontaneous reactions of ordinary Hindus and Muslims, locked in a web of mutual antagonisms said to have a long history. In the meantime, in post-Independence India, what are labelled Hindu-Muslim riots have more often than not been turned into pogroms and massacres of Muslims, in which few Hindus are killed. In fact, in sites of endemic rioting, there exist what I have called “institutionalized riot systems,” in which the organizations of militant Hindu nationalism are deeply implicated. Further, in these sites, persons can be identified, who play specific roles in the preparation, enactment, and explanation of riots after the fact. Especially important are what I call the “fire tenders,” who keep Hindu-Muslim tensions alive through various inflammatory and inciting acts; “conversion specialists,” who lead and address mobs of potential rioters and give a signal to indicate if and when violence should commence; criminals and the poorest elements in society, recruited and rewarded for enacting the violence; and politicians and the vernacular media who, during the violence, and in its aftermath, draw attention away from the perpetrators of the violence by attributing it to the actions of an inflamed mass public. When successful, as it most often is, the principal beneficiaries of this process of blame displacement are the government and its political leaders, under whose watch such violence occurs. Here also, in the aftermath, social scientists become involved when they draw attention to the difficulties of “governance” in societies where interethnic and intercommunal animosities are allegedly rampant. They thus themselves become implicated in a political discourse that focuses on these alleged difficulties of governance rather than with the suffering of the victims of misgovernance, and thereby normalizes the violence against its victims.

The Politics of Northern India: 1937 to 1987, Volume I: An Indian Political Life: Charan Singh and Congress Politics, 1937 to 1961
An Indian Political Life focuss on the role of Charan Singh in the politics of the period, while providing a broader perspective on the major issues, controveries, and developments of the time.
Forms of Collective Violence: Riots, Pogroms, and Genocide in Modern India
This collection of essays focus on the various forms of collective violence that have occurred in India during the past six decades, which include riots, pogroms, and genocide.
The Production of Hindu-Muslim Violence in Contemporary India
Explains the persistence of Hindu-Muslim rioting in India.
Theft of an Idol:Text and Context in the Representation of Collective Violence
Narratives of incidents of collective violence.
Riots and Pogroms
Case studies of collective violence in the twentieth century.
The Politics of India Since Independence
Second edition, covering Indian politics and political economy from 1947 to 1992.
Ethnicity and Nationalism: Theory and Comparison
Comparative and theoretical studies of ethnic groups and nationalities in India and the Soviet Union.
Ethnic Groups and the State
Comparative studies in ethnic conflict and the interaction of ethnic identity and the state.
Language, Religion, and Politics in North India
History and analysis of the politics of language and religious movements in northern India,
Factional Politics in an Indian State
The first major study of local politics in post-Independence India.

False Dichotomies: Truth, Reason, and Morality in Nietzsche, Foucault, and the Contemporary Social Sciences
Critique of the Social Sciences in Light of the Works of Nietzsche and Foucault
The Political Uses of Crisis: The Bihar Famine of 1966-1967
Focuses on three aspects of the Bihar Famine crisis: the process of defining the situation in Bihar; the rehtoric used in labeling it and in distinguishing it from a "normal" situation; and the responses of the authorities to the crisis.
Collective Violence, Human Rights, and the Politics of Curfew
A consideration of the consequences of curfew restrictions for the populations affected by them and the human rights issues raised by extended and punitive curfew restrictions, with special attention to India.
Victims, Heroes, or Martyrs? Partition and the Problem of Memorialization in Contemporary Sikh History
Discusses the problems of memorialization faced by religious/ethnic communities whose members have been subjected to large-scale, traumatic violence.
Review Symposium: The Production of Hindu-Muslim Violence in Contemporary India by Paul R. Brass
Reviews of my book by Thomas Blom Hansen, A. R. Momin, and Roger Petersen, with my response.
Indian Secularism in Practice
Text of article published in the INDIAN JOURNAL OF SECULARISM, Vol. 9 No. 1 (Jan-Mar 2006)
Biographies of Indian political personalities: Indira Gandhi, Jayaprakash Narayan, Vallabhbhai Patel, Lal Bahadur Shastri, Ram Manohar Lohia, Rafi Ahmad Kidwai, and Charan Singh
Biographies of Indira Gandhi, Jayaprakash Narayan, Vallabhbhai Patel, Lal Bahadur Shastri, and Ram Manohar Lohia in the New Oxford Dictionary of National Biography
Development of an Institutionalised Riot System in Meerut City, 1961 to 1982
Text of article published in the ECONOMIC AND POLITICAL WEEKLY (October 30, 2004).
Elite interests, popular passions, and social power in the language politics of India
Text of article published in Ethnic and Racial Studies, Vol. 27 (No. 3) May 2004, pp. 353-375.
"The Body as Symbol in the Production of Hindu-Muslim violence"
Chapter 1 in Ravinder Kaur (ed.), Religion, Violence and Political Mobilisation in South Asia (New Delhi: Sage Publications, 2005), pp. 46-68.
The 1984 Parliamentary Elections in Uttar Pradesh
Analysis of the 1984 parliamentary election results in Uttar Pradesh
Coalition Politics in North India
Text of article published in The American Political Science Review, Vol. 62, No. 4 (Dec., 1968), 1174-1191.
National Power and Local Politics in India: A Twenty-Year Perspective
Text of article published in Modern Asian Studies, XVIII, No. 1 (February, 1984), 89-118.
Muslims in Hindu Nationalist India
Transcript of a discussion with Asghar Ali Engineer at the Center for Ethics and Public Policy, Washington, D. C., held on January 12, 2004
The Gujarat Pogrom of 2002
Analysis of the killings and destruction in the Indian state of Gujarat after February 27, 2002.
Foucault Steals Political Science
Analysis of Foucault's ideas concerning power, knowledge, governing, and governance.

Corruption and Anti-Corruption on the Eve of Indian Independence
Prepared for the Panel on “Corruption as Practice and Discourse in India” at the Annual Conference on South Asia, University of Wisconsin, Madison, October 19-22, 2006
Riots, Pogroms, and Genocide in Contemporary India: From Partition to the Present
Prepared for the Hiroshima Peace Institute Conference on Comparative Research into Genocide and Mass Violence, Hiroshima, Japan, March 22-26, 2004)
On the Study of Riots,Pogroms, and Genocide
Methodology and ideology in the analysis of forms of collective violence

See this site for my SSRC essay on the Gujarat pogrom.
To request reprints from author (when available), click here.
Loading…}